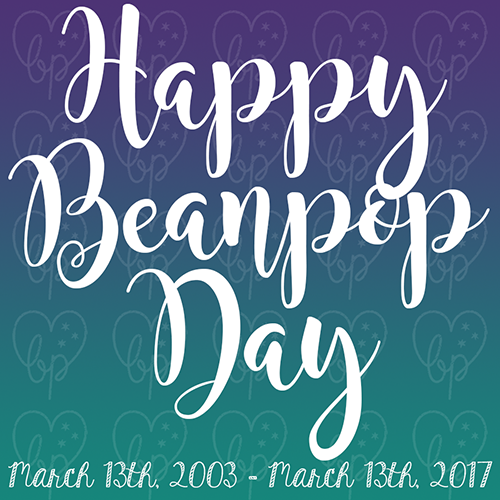 As some of you know, my twin baby boy Oliver passed away on February 15th. My life has changed, and I don't think it will ever go back to "normal". I wanted to pop on here though, and at least say Happy Beanpop Day. 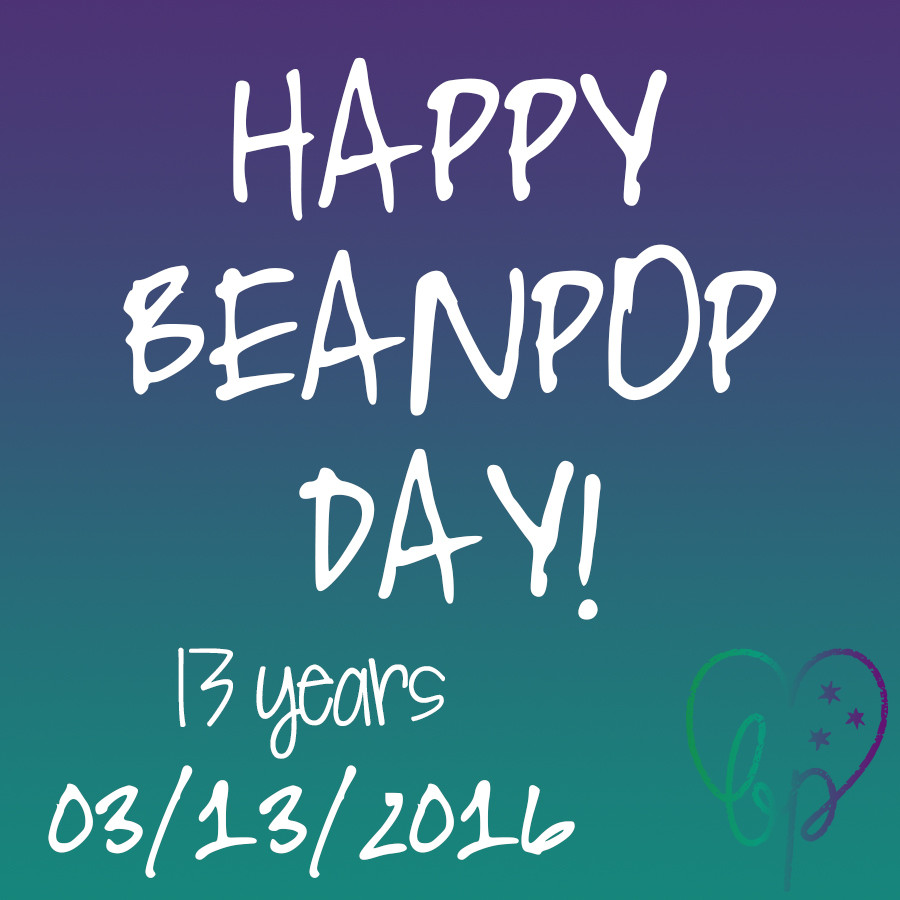 I love and miss this community more than words can express. If you happen to see this, drop me a comment or friend me on Facebook here: https://www.facebook.com/karendhare

Today makes 12 years since I first celebrated Beanpop Day. And it's Friday the 13th!

I hope everyone has a wonderful day today ♥

Man I don't post enough in here, do I?

I have been so emotional lately. I am so over being pregnant! I don't think I could handle doing this again.

I spent 3ish hours deep cleaning the downstairs today. It looks pretty good but it is still too cluttered for my taste. I think I've started nesting already...

Maddy is snuggling next to me watching some weird Color thing on Netflix. I have no idea what it is but it's pretty weird. BabyFirst? I didn't know it existed but that's what she wanted to watch.

Only 11ish more weeks to go before Nathaniel will get here. This pregnancy has FLOWN by so quick I can't even put it into words.

Alright, with that I'm going to head out and snuggle with the girly :)

Hello out there! If anyone still reads this and wants a Christmas card from us, fill out this form <3

The cards are amazing. You won't regret it <3 Don't worry if you're not sending any out, I want to send *you* one.

So android finally got an LJ app! I'm pretty sure I'll be updating much more often now.

Spencer and me are on our way up to Idaho to visit Shelby, my mom, Grandma and Aunt Sue. I haven't seen Shelby since before Maddy was born so she finally gets to meet her. It should be a good time as long as we don't run into the ex-douche.

Maddy is 4 and a half months old now. She totally wants to be able to crawl but just doesn't have the coordination yet. It's so awesome watching her grow and learn :)

I got a replacement phone and it works so much better than my old one. It's exciting. And my Smiley faces work finally :)

Anyway I'm gonna go, I don't do well typing or reading in a moving car. &hearts;

Posted via LiveJournal app for Android.

oo1. Man, I just don't have the time to check in here during the week sadly. I can do Facebook on my phone but I rarely check it from a computer. Between taking care of Maddy, cleaning the house, cooking meals and running errands I just don't have any free time to do online stuff. When I do have free time in the evenings after Maddy goes to bed I hang out with Joe watching shows because we hardly ever have time together anymore.

oo2. Maddy turned 2 months old on Thursday. Man, she's growing up so quickly. She had her 2 month check up with the doctor and her stats were great! She's up to 10lbs 11oz and 23in long. Her head is also 15.5 inches! Yay for her brain growing ;) She got 3 shots and an oral vaccine. She did not like that at all :( She's been really fussy since then but calms down about half an hour after a dose of Tylenol so I've been giving that to her here and there. Poor baby.

oo3. Work has been fairly consistent but slow today. Not a lot of tickets but the phones have kept me pretty busy. I've pumped twice now and got 10oz total so far o.O I quit pumping in the middle of the night because I have such a huge stash in my freezer but now I'm just constantly full all day. At least today I am draining both sides every 3 hours so it doesn't hurt ;)

oo4. Totally random but the soap here in the office bathroom makes my hands dry out and crack badly. Suuuck. I should bring lotion to work tomorrow.

oo5. Amy and her two girls came over last night because she was in town from Moses Lake! We had a really good time and it was great seeing her. I wish she lived closer, we really get along so well. And it's nice having a friend who has kids because they've been there, done that. I dunno, and I feel like I can connect with her more because of that.

oo6. I've noticed that I've started shedding BADLY. I always heard that after pregnancy you lose a lot of hair but it didn't start happening to me until the last week or so. But I'm shedding everywhere! Grosss.

oo7. I suppose I should get to the ticket I've been procrastinating on. Until next week ;)

Man, I suck don't I? I didn't even update on Beanpop day for the first time since I started my journal back in 2002. :( Total suck, Karen. Get with it.

I last updated on March 1st. Maddy was a month old and amazing more every day. It is now March 26th - nearly an entire MONTH since I last updated. And Maddy is now about to be 2 months old on Thursday (4 weeks old on Monday). Where did the time go?? My life is just going to disappear before my eyes at this rate.

In any case, my plan for this entry is to update about as much as I can with what happened in the last month. And hopefully from here on out I'll be able to update at LEAST once a week, if not more often. (Like I mentioned in my voice post, not having a paid account really affected my relationship with this place. Hopefully once I get back to work full time and we're bringing in extra money I can splurge and get another year paid.)

I suppose the most important thing that happened in the last month was we found out that my Grandma Burge had cancer in her kidney. We figure she had it for quite awhile looking back and seeing some symptoms that we had originally dismissed but what made us realize something was wrong to being with was that she started hemorrhaging from her bladder. My mom took her to the ER up in Newport, WA and they took her by ambulance down here to Spokane. She had emergency surgery the next day to remove the kidney and now, 3 weeks later, she is at home in recovery and the doctors are fairly certain there is no more cancer to worry about. So that was stressful but I am so glad that she's doing better!

One positive thing about my grandma being in the hospital down here in Spokane was that my mom got to see Maddy several times that week and that made her very happy :)

What else happened in March? My Spencer came to visit us and he got to meet Maddy for the first time! We had a wonderful time while he was here and it was really good to have him there to talk to during the week. Me, Spencer and Joe were able to go out to a bar and Joe's parents watched Maddy. It was really fun :)

Oh! And Spencer talked me into watching the Big Bang Theory. And I ended up watching all 3 seasons and what's aired of season 4 in less than a week. >.>

After Spencer left it was back to the regular daily "housewife" activities before I started back to work March 19th. I took tons of pictures of Maddy though! She started developing a personality about halfway through the month, as you can see here:

Boy does she have a 'tude sometimes! But she's so cute anyway ;)

We got a surprise in the mail the day that Spencer left to go home! An AWESOME Doctor Who fitted cloth diaper:

Thank you so much

chelelev! The diaper is still slightly too big for her, which is why I haven't gotten a picture of her in it yet. But since she's up over 10lbs now I'm going to try it on her again next week :D It's so awesome, I love it!

Maddy hit another milestone this month = she outgrew her newborn sized clothes. She went from weighing 9lbs 3.5oz on March 10th to weighing 10lbs 4oz on March 25th! My big girl! Here are a couple of pictures of her in her first 3 month size outfits:

(No, I am not ashamed to have breastfeeding pictures! It's the most natural way to feed a baby and I think everyone should be more exposed to that.)

Joe snapped a really cute picture of me and Maddy sleeping together one morning before he went to work:

She's been really good about sleeping in her crib all night but sometimes in the morning I'll pull her into bed with me so I can get another couple of hours of sleep in ;)

Anyway, Maddy matured so much in March - she started following me around with her eyes, she started almost responding to noises, she started staring at the lights and other things around her and she started smiling and cooing at us when we talked to her! Here are a few more pictures:

Almost got a smile on camera! She almost looks like she's talking to me ♥

New paci, which she loves.

When I went back to work Joe got his first weekend alone on baby duty and sent these pictures to me while I was at work:

Her first smile on camera!

Ahhh, in other news I can finally file my taxes this week! I had been waiting and waiting on my 1099-g form from CO unemployment but it never came. I ended up having to wake up at 5am to feed Maddy and then staying up until 6:30am when the unemployment line opened so I could call and actually get through to talk to someone. I called literally 1 minute after they opened and I was still on hold for 40 minutes. Unbelievable! But I'm just hoping I get some sort of refund back so I can get Maddy some new clothes/diapers/toys. I want to spoil her a little bit :)

And that takes us up to today! I'm at work, it's incredibly slow (in case you couldn't tell by how ridiculously long this entry is) and I get to go home in a little over 4 hours. I can't wait :)

If you actually read this entire thing you deserve a cookie. Whew! Hopefully April is better for updating :)